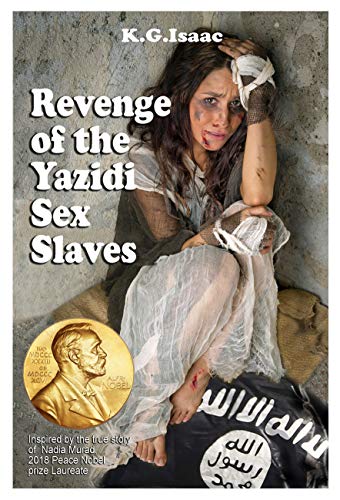 We all know sex slavery is one of the worst things in our society and to raise this issue many good people are raising voice so we have a book today on this topic only which covers a real story of a girl. Let's see a glimpse of this one:

Dr. Sharma Jassem was sure she'd seen him before. She strained her memory, and the answer pierced her mind like a sharp surgical scalpel: Abu-Bakr al-Baghdadi, the supreme commander of the Jihadist militant group ISIS. "Doctor, there's a rumor that you encourage pregnant Yazidi women not to have an abortion", he hissed. "It means that you are preventing my soldiers from sleeping with infidels, as the holy Quran tells us!" A note of threat crept into his voice. "Whoever violates the will of Allah is doomed to die!"Revenge of the Yazidi Sex Slaves unfolds the dire fate of numerous Yazidi girls and young women, spoils of war for the ISIS militants. 15 years later, they avenge their sexual abuse in an amazing scheme. Revenge of the Yazidi Sex Slaves is written in the best tradition of conspiracies master, K.G. Isaac

This is about lives that are spoiled. Let's read this book and make sure no life will be demolished with this.

22 June 2021NewsArtur Ciechanowicz (PAP)
The operators of online platforms, as a rule, do not make publicly available content protected by copyright unlawfully posted on these platforms by their users, the Court of Justice of the EU ruled on...
Read More
You may be interested in: