Imagine powering your devices by walking. With technology recently developed by a group of researchers at the Chinese University of Hong Kong, that possibility might not be far out of reach.

The group describes the technology in Applied Physics Letters, from AIP Publishing. A 1.6 microwatts power generator is attached to the wearer's knee while the wearer walks without any increase in effort. The generated energy through walking is enough to power small electronics like health monitoring equipment and GPS devices.

Wei-Hsin Liao, a professor in the department of mechanical and automation engineering said, "The attention of climbers and mountaineers will be grabbed by self-powered GPS devices."

The researchers used a special smart microfiber material, which generates energy from any sort of bending it experiences, to create a slider-crank mechanism—similar to what drives a motor. The authors chose to attach the device to the knee due to the knee joint's large range of motion, compared to most other human joints.

Liao added, "From large deformations, these harvesters can harvest energy directly from there." 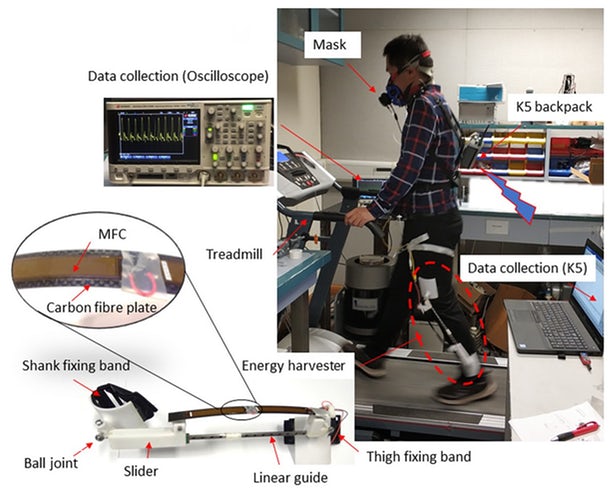 Due to the continuous back-and-forth, the material will encounter when the wearer walks, every time the knee flexes, the device bends and generates electricity. This means the harvester can "capture biomechanical energy through the natural motion of the human knee," according to Liao.

Previous wearable energy harvesters took advantage of the vibration caused in the device as a result of motion, which comes with drawbacks regarding efficiency.

"The frequency of human walking is quite slow, which significantly decreases the energy-harvesting capability," Liao said. Because the group's device uses a different method, it bypasses this limitation.

The prototype weighs only 307 grams (0.68 pounds) and was tested on human subjects walking at speeds from 2 to 6.5 kilometres per hour (about 1 to 4 miles per hour). The researchers compared the wearers' breathing patterns with and without the device and determined that the energy required to walk was unchanged, meaning that the device is generating power at no cost to the human.

The researchers note the advantages of an efficient, wearable energy harvester and look towards future commercialization of the technology.

" Due to inconvenience faced by users of daily charging self-powered equipment, it can enable users to get rid of the major issue," said Liao

This energy harvester would promote one to walk more so that they do not run out of battery and can improve users' health.