Bossaball Sport is all in one combination of volleyball, football, and gymnastics

Bossaball is an acrobatic and energetic game, blend of sport, music and great fun. Incorporating elements of volleyball, football and gymnastics, a game of bossaball is played on a specially designed inflatable platform integrated with trampolines in the middle. Although it is possible to play bossaball without music, Bossa Nova tunes (hence the name “bossaball”), which usually sets the rhythm of the game, is a major feature of the sport. At the time of  large scale events, a game of bossaball is usually overseen by a “samba referee” who concurrently takes on the role of Master of Ceremony and DJ for the event.

An exciting spectator sport unlike any other, Bossaball has been featured alongside major events that not only include sports but also music, beach and town festivals. Often times, audiences get awed by players who deliver “acrobatic infused” serves, shots and fierce spikes with much style and flair. At the same time, the accompanying music creates a festive mood that spectators enthusiastically partake in celebration.

Bossaball is a new sport that was invented by Filip Eyckmans who hails from Belgium. In 2004 the sport was launched to the world and has been introduced to various countries in Europe, Latin America and the Middle East. Bossaball has taken off in countries such as the Netherlands,Belgium, Spain and Brazil. Currently, the Netherlands is the only country that has a major bossaball league.

Rules (How to Play) 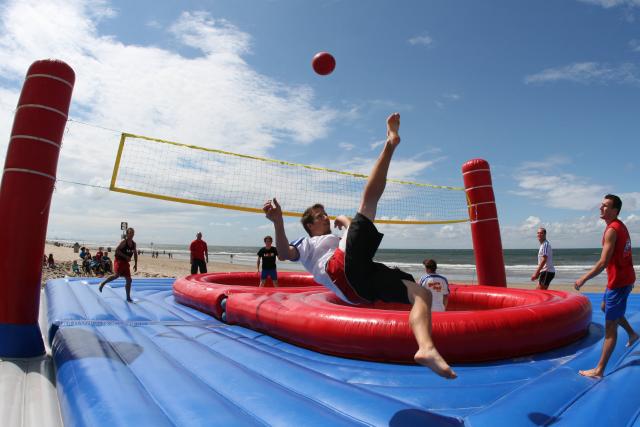 Similar to volleyball, the objective in bossaball is to ground the ball on the opponent’s side of the court.   According to Bossaball Singapore, the following are official bossaball rules for tournaments:

This sport derives influences from various sources bossaball is physically demanding, yet exciting and a whole lot of fun. Clinics and workshops are organized from time to time. If you also want to get started on Bossaball, you can make an appointment.

Can call Bossaball Singapore 61006292 or email This email address is being protected from spambots. You need JavaScript enabled to view it. for more information..